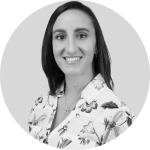 Joanna Magnani is GREENCROWN Energy & Water’s Manager of Operations. Mrs. Magnani’s responsibilities include pricing and contract flow as well as reconciliation and accounting. Mrs. Magnani has 14 years of energy experience in both sales and operations roles which have generated a broad yet thorough set of skills and knowledge.

After several years in sales, Mrs. Magnani decided to return to operations and joined the GREENCROWN Energy & Water team in late 2018. She then worked diligently to develop new processes and standards to make sure the operations team is properly prepared to support the growing sales team.

Mrs. Magnani has an extensive career in the energy industry. After graduating from Monmouth University, she started her career at Hess Corporation. Through her seven years with Hess Corporation, Mrs. Magnani experienced positions in different parts of the company providing her with a wealth of experience in both career and internal growth. She then continued her career in a sales position at Hudson Energy where she worked for four years. Her career has molded her to be the perfect fit for GREENCROWN Energy & Water.

Mrs. Magnani looks forward to being a part of GREENCROWN Energy & Water’s future as they work towards becoming the nations most trusted and professional energy risk management advisory firm.