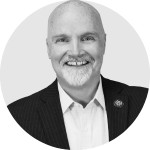 Les Vail is very passionate about giving back to the community at large and has only accepted positions in which he believes in the organization’s mission and feels he can be an asset. With 35+ years of sales, management and entrepreneurial experience, Les thrives on developing relationships and growing the community, which earned him the distinction of being named the New Jersey Governor’s Jefferson Award for Executive Leadership Medal Honoree.  Les is thrilled to part of the GREENCROWN Energy & Water team as Senior Manager, Business Development and still has speaking engagements on relationship development, networking and corporate growth on GREENCROWN Energy & Water’s behalf.

In 2019, Les was awarded New Jersey Business Industry Association’s Non-Profit Executive of the Year. Les’s accomplishments to the community and business have been recognized by his peers where he most recently received:

Les’s proudest accomplishment is the life he shares with his Family.